The Art of Resistance: EP JO-TX

“Black trans women were at the forefront of queer liberation,” says Joshua Enrique Lerma co-designer of EP JOTX, a new queer grassroots movement created with collaborator Pico del Hierro-Villa. Pride was rooted in activism and creating an alternative queer space in El Paso to discuss borderland LGBTQIA+ issues became a priority for Joshua and Pico after the Walmart shooting last August because organizers wanted to provide a space for healing. 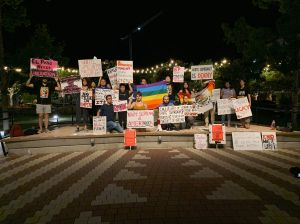 “We printed it was white supremacy on the flyer,” says Lerma about the peaceful protest they organized last summer. The massacre prompted them to organize a night of solidarity in San Jacinto Plaza. “He was targeting all brown people. It didn’t matter if you were whitewashed. He was going to shoot you if you were visibly Mexican. It wasn’t mental illness.  It was a white guy with a gun.  It was white supremacy.”  The rally was meant to be a one-time event, but there was enough interest to continue organizing.  The movement was first called El Paso Queer Resistance Collective, but Pico and Joshua took a creative branding approach.

Pico and Joshua’s use of EP JOTX. is a play on words that draws inspiration from joto, El Paso, and the “x” used as a gender-neutral letter in Spanish (i.e. Latinx). It is pronounced with the Spanish “j” and reclaims the word jotería. They operate utilizing decolonized principles such as non-hierarchical organizing and strive to ally with other grassroots organizations such as the Trans Youth Coalition and Trans Fronterizxs to raise awareness on queer and LGBTQIA+ issues in the borderlands.

They have cited the Stonewall Riots as inspiration for their work by incorporating a radical spirit to their organizing. Pico and Joshua reimagined what pride could be without police, corporate sponsorship and non-profit hierarchy.  Considering 20% of detained juveniles are queer youth and law enforcement’s failure to protect and serve transgender people, they want to offer El Pasoans a free alternative to pride grounded in solidarity and LGBTQIA+ dialogue.

For EP JOTX, queer liberation is intergenerational and achieved by community building, supporting multiple struggles and the unlearning of hetero-normative behaviors. Lerma states, “Creating awareness of queer-systemic topics in institutional settings and addressing issues that tend to occur in queer spaces is the recipe for change. At the personal level: by transforming ourselves, we transform the future.” The scope of this movement and work is to focus on strength and abilities of those willing to participate in courageous and uncomfortable conversations. These are the same type of conversations historical queer icons such as Marsha P. Johnson had when she realized it was time to fight the system at The Stonewall Inn.

EP.JO. TX will be hosting online activities in July as a call-to-action involving art and dialogue.  To get involved, they can be reached at epjotx@gmail.com or you can find them on Instagram @epjotx.