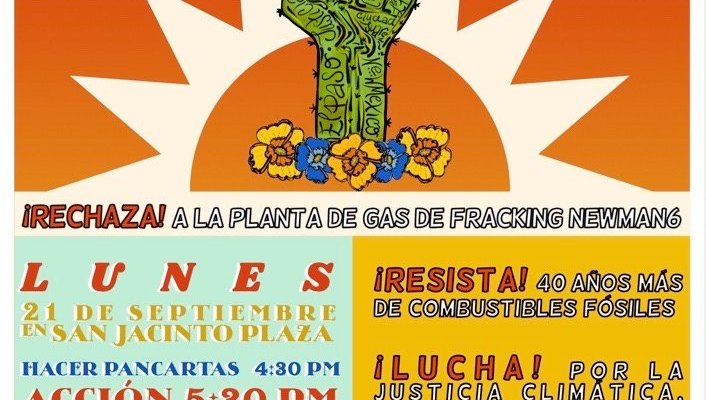 If approved, this project would further pollute the air of Chaparral, lock-in fossil fuel dominance over clean energy in El Paso for the next 40 years, and strengthen the Permian fracking powerhouse industry which affects Southeast New Mexico, West Texas, and the global climate crisis.
El Paso City Council has the legal and political autonomy to stop this plant.

Chaparral lies on the border of New Mexico and Northeast El Paso, Texas. It is a majority Spanish-speaking, immigrant mixed-status community that faces the threat of a new, polluting, 228-megawatt fracked-gas generator called “Newman Unit 6.”

Currently, the Newman Generating station is one of the largest sources of El Paso’s air pollutants, and is a massive contributor to the El Paso region’s Ozone pollution being above National Air Ambient Quality Standards. Ozone can cause asthma attacks, heart attacks, and other serious health problems. If the Newman 6 project is approved, the following pollutants would exceed EPA’s standards for air quality: Particulate Matter (PM), PM10, PM2.5, nitrogen oxides, volatile organic compounds, carbon monoxide, and carbon dioxide.

The El Paso region is connected to the Permian Basin shale via the El Paso Pipeline. If built, the Newman 6 project would strengthen the production capacity of this Permian Basin–the largest producing oil and gas shale in the world, and the largest emitter of methane in the United States. Methane is a greenhouse gas 86x more powerful than carbon dioxide (CO2). Additionally, EPA’s CO2 air quality emission standard for a generating station like Newman is 75,000 tons per year. If built, Newman 6 would bring the station’s emissions to 1,335,500 tons per year–that emission rate is about 18x higher than the EPA standard.

El Paso Electric (EPE) is the utility currently in control of the Newman Generating Station, and are proposing that Newman 6 be added. Earlier this year, EPE was bought out by JP Morgan Chase. This Wall Street bank is the largest financier in the climate crisis–investing directly in oil and gas companies in the Permian Basin. They were forced to pay $410 million for manipulating prices in the electricity market in California and Michigan. JP Morgan is not trustworthy, and neither or natural gas plants. Renewable energy is now cheaper than fracked-gas. Cities like Dallas who have built new gas plants are struggling to maintain financial health.